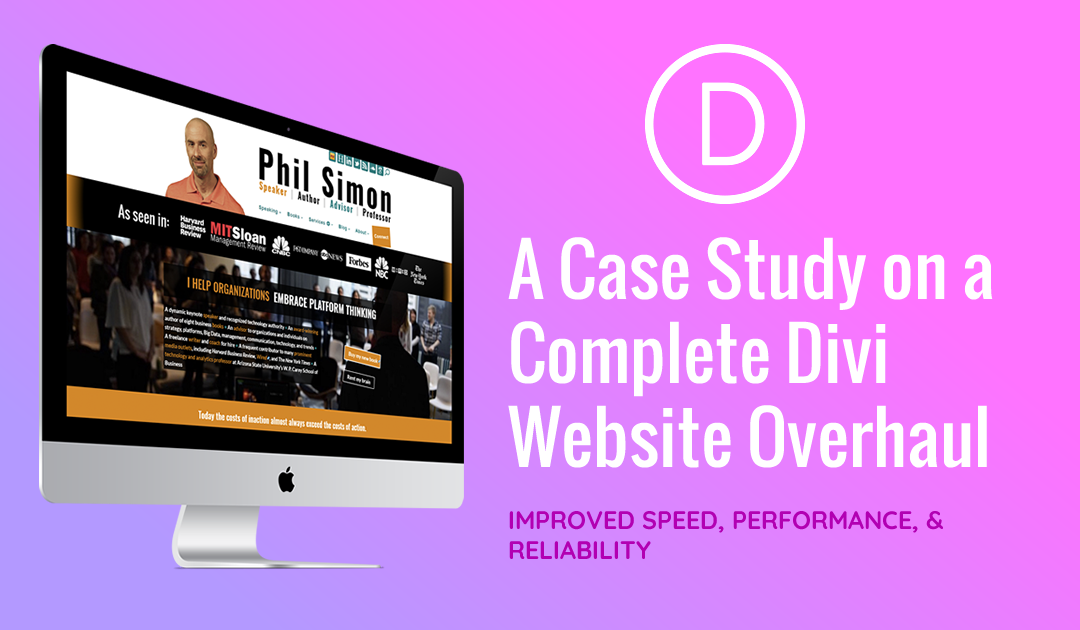 In 2018, Phil Simon wasn’t just facing a website dilemma; he was looking at a existential crisis.

By way of background, Simon is a frequent keynote speaker and recognized technology authority. He is the award-winning author of eight management books, most recently Analytics: The Agile Way. His web presence was both paramount and problematic. In other words, his website has long been his window to the world.

Unfortunately, that window had been starting to crack for the past two years. Simon had moved to WordPress in 2009. Over that time, he had experimented with a number of different WordPress themes, dozens of plugins, and plenty of snippets of code. As he likes to say, he’s a tweaker—at least in the design sense.

In October of 2014, he moved his site to Divi. “I chose the theme because I loved the ability to easily add my own columns, page layouts, and the like. Plus, Divi’s community is enormous. I knew that I’d be able to learn from what others had done.” 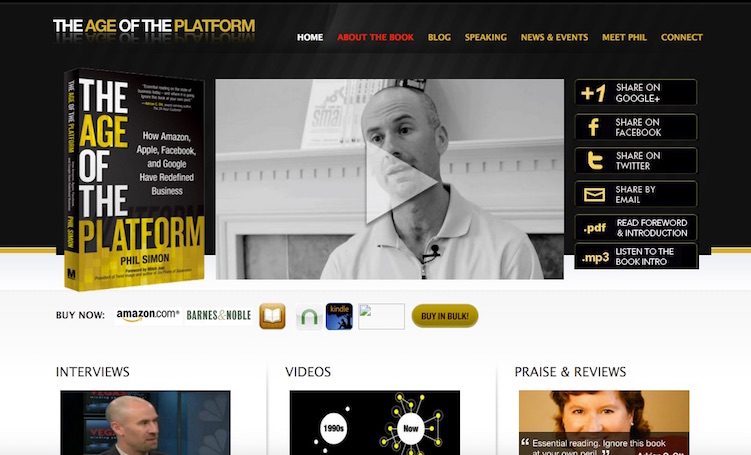 Over the next four years, Simon began to experience some problems with Divi. (To be fair, this isn’t uncommon in the WordPress world.) For example, Divi updates sometimes broke key parts of his highly customized site, something that happened more as Divi kept increasing its functionality. His sister even told him that his contact forms didn’t allow her to complete them. Although he now works full-time as a professor at ASU, an issue such as this could cost him lucrative speaking and consulting opportunities.

Beyond that, some of his code was a bit kludgy. For instance, Simon had ported over key elements of his speaking page from prior WordPress themes. Simon had to frequently disable the visual editor when writing pages and posts. Forgetting to do that would break parts of his site—a source of real frustration. At a high level, what worked well in 2012 was not working so well 2018.

Then there was the speed issue. Simon never expected his site to load instantly. Still, an eight-second delay hurt his SEO and didn’t thrill the sometimes impatient Simon. No doubt his love of plugins increased the loading speed of his site. In some cases, site elements actually posed significant security risks.

Simon would often write his blog posts in Google Docs because of the time that his site required to save them. This required him to make some stylistic changes every time that he wanted to publish his thoughts to the world. Non-Breaking SPaces (NBSPs) really irritated him.

Compounding matters, occasionally pages would break. This required him to go to phpMyAdmin to trick WordPress into working. Simon was familiar with WordPress’ database structure, but the process was adding friction to maintaining his site.

A long back-and-forth with Elegant Themes’ support June of 2018 brought him to a crossroads: He needed to either really fix Divi or find a new theme or content management system. Was a multi-purpose theme even right for him?

In Simon’s words, “I had accumulated a bunch of extraneous files and data in the WordPress database. Database-cleaner plug-ins were no longer getting the job done.” Simon continues: “It was high time that I blew it up and had it it rebuilt. Craig Bruce’s quote about temporary problems was spot-on.”

Simon explored his options with Monterey Premier over the course of an hour-long phone call. (He’s not a fan of e-mail for these types of conversations.) Sure, the company could apply a series of Band-Aids to his site. This short-term solution would be less expensive, to be sure, but it wouldn’t solve the underlying problems plaguing his site.

So much for option A.

The long-term but more expensive solution appealed to him: Let Monterey Premier rebuild his site from scratch. A new child theme would allow a consistent, highly skilled, and fresh set of eyes would allow Simon to have his cake and eat it, too. He could concurrently increase his site’s reliability, speed, and security and retain the overall design aesthetic of his site.

To his site’s visitors, www.philsimon.com appears virtually identical to its bloated predecessor. To Simon, though, there’s a world of difference. Monterey Premier’s tuneup means that Phil Simon’s new Divi child theme loads much faster, is more secure, and much more reliable.

What’s more, Simon can confidently update Divi and plugins without worrying about breaking something—at least to the same extent as before. The underlying code base for his site is far more contemporary and stable than before.

“I only wish that I did this sooner,” Simon says. He’s excited to take advantage of Divi’s new features in the upcoming months.

And we are excited to be a part of helping Phil Simon get back to enjoying working on his window to the world.

Geno is the Owner/Creative Director at Monterey Premier based in Monterey, Ca.. He has been designing websites since 1996 and enjoys all things design, traveling, hanging out with friends, encouraging other believers, and experimenting with new technologies. When not doing any of the above, you can find Geno blogging here, or writing Divi customization tutorials over on Quiroz.co.